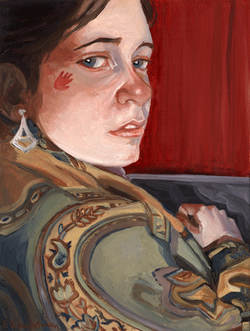 Nathaniel Hawthorne’s character, Georgiana, within his story “The Birth-Mark” serves to embody a few of Hawthorne’s ideas in regards to women. Georgiana’s husband, Aylmer, uses different types of emotional abuse in order to control his oppressed wife and transform her into his ideal version of perfection. This story has been debated as a feminist tale where the conclusion is ultimately decided by the individual reader. My reading of “The Birth-Mark” leads me to believe that it is a cautionary tale through Hawthorne’s examples of emotional abuse, gaslighting, and brainwashing between Aylmer and Georgiana. Consequently, I do not find the story to be a feminist tale due in part to the way Aylmer and unnamed men from Georgiana’s past treated her birthmark but also due to the way Georgiana is portrayed throughout the story as this feeble creature.

The start of the story details the initial conversation about Georgiana’s birthmark and how it deeply disturbs Aylmer. This is where the audience sees the first instance of Aylmer’s emotional abuse as he tells his wife that “upon another face,” her birthmark may be a sort of charm or beauty mark (Levine, 695). The speaker then acknowledges that:

Georgiana’s former lovers were wont to say, that some fairy, at her birth-hour,
had laid her tiny hand upon the infant’s cheek, and left this impress there,
in token of the magic endowments that were to give her such sway over all hearts.

At first glance, this could be read as Hawthorne quietly expressing that she was beautiful regardless of the birthmark but there is a secondary reading of this sentence. This sentence introduces the idea of “the male association of the birthmark with magic” which is a result of “keeping with patriarchal tradition associating women with all that is mysterious, changeable, unintelligible, intangible, intuitive, or inexplicable” (Skredsvig, 102). Georgiana was given these elaborate fairytale backstories as a way for men to blame her for why they were enamored by her. Specifically, they claimed that “the magic endowments that were to give her such sway over all hearts” (695). Fellow women called the birthmark the “Bloody Hand” as a way to minimize her beauty. However, none of this had bothered Georgiana until her husband came along.

Aylmer personified this tiny birthmark by claiming that the birthmark “expressed the ineludible gripe in which mortality clutches the highest and purest of earthly soul, degrading them into kindred with the lowest, and even with the very brutes, like whom their visible frames return to dust” (Levine, 696). This sentence can be perceived as misogynistic since this “is visible confirmation not only of human mortality but of human inferiority, which is represented as female” (Skredsvig, 103).

Another important thing to note about how Aylmer perceives Georgiana is that the topic of the birthmark only came about “very soon after their marriage” (Levine, 695). This alludes to a large problem which is that Aylmer had thought this through carefully. He understood that it was much more difficult to leave a husband than it was a boyfriend so he had no brought up his distaste for the birthmark until after he had “trapped” Georgiana. One could say that he could have found a different woman to marry that didn’t have a birthmark but Georgiana “embodied those traits considered desirable in a wife: she is demure, proper, delicate, supportive, refined, and, above all, submissive” (Skredsvig, 103). Georgiana, in all regards, is extremely submissive towards her husband, but especially in regards to the birthmark topic.

Aylmer takes Georgiana into a chamber to seclude her away from everyone in order for him to work on removing the birthmark which results in him keeping Georgiana from thinking the birthmark is anything less than a terrible imperfection. He started off with small gestures to show his disgust, such as how he “tenderly kissed her cheek—her right cheek—not that which bore the impress of the Crimson Hand” which is also one of the examples throughout the story of Hawthorne’s satirical element (Levine, 698). While in seclusion, Aylmer “attempts to unite his love for science with his love for his wife” which is really Aylmer’s way of using his wife for his own personal gain (Mehdi, 5).

Aylmer views Georgiana’s birthmark as a “mark placed upon women by the society when woman is left undefined” (Mehdi, 6). Georgiana and fellow women of the 19th century had no agency and were controlled and defined by the men around them. Georgiana doesn’t fight this already created way of life and even goes along with it. She asks Aylmer on page 697 if “this [is] beyond your power” which in turn “removes the blame from Aylmer and places the blame on society because society produces him” (Mehdi, 6). She doesn’t even give him the chance to take accountability for what the procedure will do to her and rather blames outside forces because that is what her ideology tells her to do.

Within her isolation, Georgiana’s thought process and overall demeanor begins to change. She ends up to a point where “not even Aylmer now hated [the birthmark] so much as she” which is a result of her isolation and manipulation (701). She even goes on to admit that she worships him on page 702 but then begins to question him as she enters his laboratory. He had clearly lied about his accomplishments to his wife and her attempts to reveal the truth about his experiments caused Aylmer into a fit of rage where he, to no surprise, refuses to take accountability but instead throws it back on Georgiana. He asks her if she has “no trust in your husband” and results in Georgiana saying that she submits to him and his experiments, which inevitably leads to her own death (Levine, 703). This is also a textbook example of gaslighting, where he hid and covered up the truth of his experiments, convinced his wife to doubt her own beliefs about her birthmark, and had the desire to change his victim for his own personal gain.

Georgiana then begins to go insane, screaming for her husband to “remove it! Remove it! —whatever be the cost” which shows that he has completely destroyed her emotionally and mentally (Levine, 703). She, at this point, is fully brainwashed by her husband to a point where she sees manipulation as a positive thing in the section:

She considered the character of Aylmer, and did it completer justice than at any previous moment.
Her heart exulted, while it trembled, at his honorable love, so pure and lofty that it would accept nothing less than perfection,
nor miserably make itself contented with an earthlier nature than he had dreamed of.

This is the telltale sign of abuse as she is now exclusively focused on being submissive in order to be what her husband wants her to be. As Kary Skredsvig phrases it, “the fact that she is even willing to risk death in order to please her husband must surely be recognized as the ultimate sacrifice” but it can also be seen as the ultimate level of control (Levine, 103). Aylmer is only concerned with himself, how he feels he “deserves” the unattainable version of perfect, how he berated her with questions without every questioning his own imperfections.

This story ends with Georgiana’s death, which therein lies the moral of the story: live in the present. This moral is summarized in the final three sentences of the story which states:

Thus ever does the gross Fatality of Earth exult in its invariable triumph over the immortal essence,
which, in this dim sphere of half-development, demands the completeness of a higher state.
Yet, had Aylmer reached a profounder wisdom, he need not thus have flung away the happiness,
which would have woven his mortal life of the self-same texture with the celestial.
The momentary circumstance was too strong for him; he failed to look beyond the shadowy scope of Time,
and living once for all in Eternity, to find the perfect Future in the present.

This repeats the idea that Georgiana had told him on her deathbed and repeats the idea that one should not spend their entire life seeking out perfection. This is also an idea regarding science, since Aylmer “is obsessed with nature and perfection yet in a vain attempt to create something perfect, he only destroyed it,” which is something that can also be said about “science and the power of knowledge (dangerous knowledge)” (Smith, 2). Smith also describes how there is a laughter in the end but this laughter “could be Nature herself” laughing at the selfish attempt at unattainable perfection when Aylmer should have just cherished what he had (1).

While I do not see this story as a feminist tale, I do see it as a cautionary tale that explains the signs of an abusive relationship and gives multiple examples of gaslighting. One could take that warning as feminist in nature but due to the mistreatment of Georgiana throughout the entire story, I cannot see it as such. There are a few layers to this story that are worth exploration, such as the battles between “science vs. nature, obsession vs. love, perfection vs. imperfect, [and] love of thoughts vs. love of the heart” (Clemens). However, one thing stands true in the end: time spent chasing perfection is time wasted as perfection lies all around us in different ways.