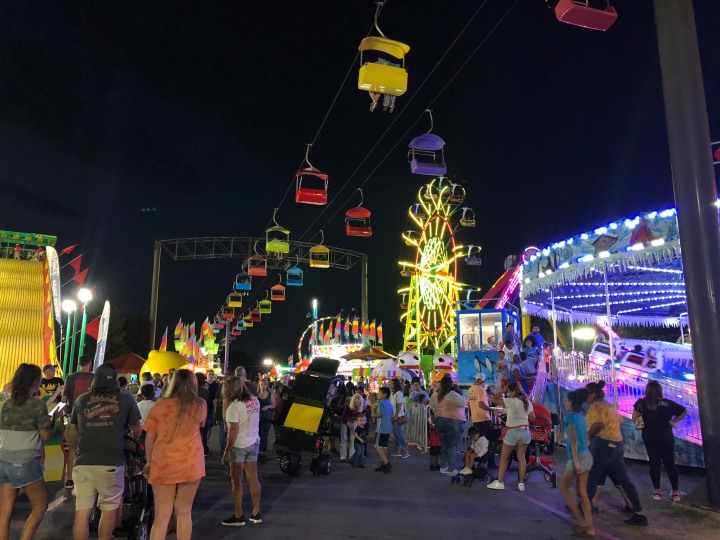 Funnel cakes, men on stilts, and the sound of children laughing. What could be more fun than a fair? I have lived in this city for almost five years now but never realized that there was a county fair fifteen minutes away from me. I was so excited I actually went twice in a single week. Now, I was raised in West Palm Beach, where we had the South Florida Fair. I am accustomed to larger, more chaotic fairs. I also have had my fair share of smaller fairs, such as the one in Towns County. However, the North Georgia State Fair was a good middle ground between the two and quite the enjoyable experience.

Now, this fair actually has a roller coaster. I know, those of you from bigger cities are probably like “yeah? So what?” That’s a rarity around here. Having a singular roller coaster is mind blowing to many people. Nonetheless, there were quite a few rides to enjoy. Some of them were repetitive, such as the Himalaya and Matterhorn rides, but that just allowed for people to have to walk less for a specific ride. There were tons of rides and attractions for children to enjoy, too.

All of the works at this fair were incredibly kind. They were pretty patient with kids, made jokes for us, and above all made us feel safe on the rides. In my personal experience, most fairs that I have attended had short tempered workers, and rightfully so. As fun as fairs may be for us casual customers, it’s a whole different experience for those that work there. While I understand their frustration, it was nice to see most of them so happy at their job.

This fair also had quite a few things to do outside of rides. Near one of the entrances, there was a pig race and a man carving incredible sculptures out of wood and a chain saw. There were animals that you could feed and pet for a small price. There was also a stage set up for “Lady Houdini” and “American Ninja Warrior”. To my joy, they had a place to watch dogs do tricks. Lastly, there was a concert hall where musicians could play.

Like most fairs, they also had carnival games and other activities such as the “let me guess your weight and you can win a prize if I’m wrong” guy (you know the guy), getting a caricature drawn of you, the “do this strenuous activity and win some money” events, and more. I also found an air conditioned hall that had a sand sculpture inside as well as booths for people to sell things.

I personally hadn’t been to a fair in quite some time and was extremely overwhelmed with the amount of smells and noises inside. The smell of foods that are not normally deep fried being deep fried, the sound of the rickety roller coaster in the distance, smoke from various eateries burning my eyes, the carnival games people yelling for you to go play their games was a lot all at once. However, going to the fair with people I know and love made it easier to withstand since they understand why I need to distance myself and take a breather for a bit.

There was one thing that was a bit off putting for me personally. At this fair, they had a tent for more “exotic” animals. They had a small cage with around 5 lemurs, one of which was missing an arm. They had an actual zebra as well. However, the most unsettling thing was seeing the giraffe in a very tiny cage. The only thing it was able to do was walk in a small circle all day while people fed it snacks. I am an avid animal lover and hated the idea of this giraffe in such a small enclosure for hours upon hours. The same goes for their farm animal section. We observed many types of chickens in incredibly small cages desperately trying to get some water to come out of a small water bottle on the top of their cages.

Other than that, the fair was incredibly fun. There so much to do and you could easily spend several hours there enjoying yourself and having fun. I’m a little upset that I didn’t know about this fair until now but felt as though I needed to tell others about its existence.

One thought on “A Day At The North Georgia Fair”